Determines the severity and outcome of traumatic injuries in triage based on physiological scoring.

In the text below the calculator there is in depth information on the RTS model and on the associated survival percentages.

The revised trauma score, also known as the RTS, is based on the Glasgow coma scale and on two vital signs (systolic blood pressure and respiratory rate).

It is used to assess the severity and outcome of the traumatic and non-traumatic injury in patients that arrive for triage.

This physiological trauma scoring has shown increased sensitivity compared to other triage criteria.

The RTS introduces the GCS score, the systolic blood pressure and the respiratory rate in the following formula:

The RTS can be between 0 and 7.8408. A threshold of 4 has been established as indicative for treatment in the trauma centre.

Patients obtaining scores below 3 are considered unlikely to survive.

Send Us Your Feedback

Steps on how to print your input & results:

1. Fill in the calculator/tool with your values and/or your answer choices and press Calculate.

2. Then you can click on the Print button to open a PDF in a separate window with the inputs and results. You can further save the PDF or print it.

Please note that once you have closed the PDF you need to click on the Calculate button before you try opening it again, otherwise the input and/or results may not appear in the pdf.

The on site triage method proposed in the revised trauma score evaluates the severity of the injury based on the Glasgow Coma Scale and two vital signs: Systolic blood pressure (BP) and Respiratory rate.

The GCS is used because of the indications it can provide in regards to the severity of brain injury. Values are between 3 and 15 points, where scores under 9 indicate severe injury.

The systolic blood pressure, measured in mmHg, offers information on the pressure by which blood is pumped from the heart to the arteries. Normal values are between 90 and 120. High BP is indicative of hypertension.

Respiratory rate or the ventilation rate, measures the number of breaths (inspiration-expiration cycles) in a minute. Normal RR is also called eupnea and is around 60 breaths per minute. Increased RR is called tachypnea while decreased RR is called bradypnea.

The user inputs in the calculator the values they find in the patient assessment. These are correlated with the following number of points which in turn are used in the RTS formula.

The score is calculated based on this formula:

The revised version excludes the capillary refill and respiratory expansion from the initial score because this was hard to determine in the field.

There are other physiological trauma scoring methods, such as APACHE II or the acute trauma index.

A patient obtaining a score below 3 is considered to be highly unlikely to survival regardless of intervention and therefore is declared dead.

A threshold at 4 has also been established as an indicator for treatment in the trauma centre.

The original study from 1989 by Champion et al. has discovered a strong correlation between the RTS result and survival probability, as exemplified in the table below:

Below is the Revised Trauma Score chart presenting the survival probabilities: 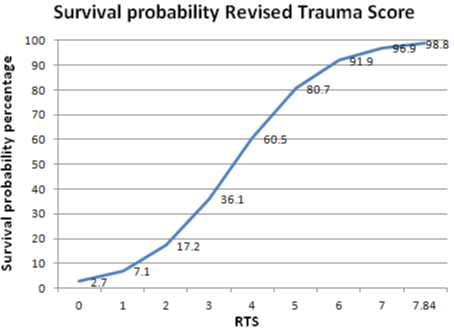 The tool will be add free;

There is no resource limitation, as if the tool was hosted on your site, so all your users can make use of it 24/7;

The necessary tool updates will take place in real time with no effort on your end;

A single click install to embed it into your pages, whenever you need to use it.